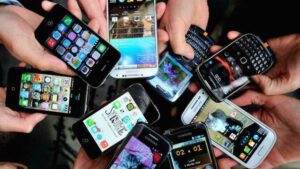 With all the Apple iPhone hype (and Samsung and others) going around there are dozens of articles talking about sales, problems, people sitting in lines and so on. And at the end of each article are a slew of comments from all sorts of people who agree or disagree with the author (or the other commenters). But I’ve noticed that there are quite a few people writing comments who say things like “I’ve got an iPhone 5S, a new iPhone 6 and a Galaxy S5 and I think the new iPhone 6 is…” or words to that effect.

My question is, why do these people have so many phones?

I can understand why technology reporters might get the latest and greatest new phones whenever they come out because it’s their job to keep up on these things and write articles about them. But even then I suspect that they have a favorite phone that they use most of the time and occasionally replace it with a newer, more up to date favorite.

I don’t know anyone who carries around more than one phone unless one of them is a company-supplied phone and they are required to use only that phone to access the company network or make business calls.

When my daughter was a teenager (and even now that she is in her early thirties) she used to get a new phone every few months but that was mostly because she would sit on her old one (or lose it or drop it in the toilet).

I only have one phone. (Okay, I’ve got a box in my garage somewhere with a dozen ancient Nokia flip-phones that just aren’t worth trying to sell. I’ve also got a box of old remote controls and another box with dozens of chargers and power adapters – I just can’t seem to throw any old electronics away.)

My current HTC phone (a T-Mobile MyTouch 4G, if anyone cares) works fine and I’m happy with it even though it’s three years old. I’ve never dropped it in the toilet. I’ve never sat on it. I don’t have very many apps loaded on it and I rarely scout around for new apps. Yes, I’m an old curmudgeon.

Even if I had the money I wouldn’t spend more than a few hundred dollars for a new phone (if that) and I certainly wouldn’t buy more than one phone. Yet there seem to be a lot of people out there who have two, three or more phones and the ones they mention aren’t cheap. A couple of iPhones and a Galaxy S5 would cost you over $2,000 (not to mention your monthly service charges). What are people doing with all these phones?

I don’t get it. Do you have more than one operational phone?