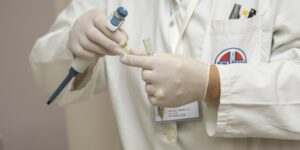 According to the World Health Organization (WHO), arthropod-borne diseases account for more than 17% of all infectious diseases across the globe, resulting in more than 700,000 deaths annually. These illnesses are typically spread by bites from mosquitoes, fleas, ticks and flies that carry disease-causing microorganisms. Arthropods can carry and transmit bacteria, viruses and parasites to humans.

People tend to think of larger animals like crocodiles and bears or poisonous animals like snakes and spiders as major threats – but in fact mosquitoes cause more deaths worldwide than all other animals combined. Ticks and mosquitos are the most common sources of arthropod-borne disease in the U.S. Despite advances made in laboratory testing, the diagnosis of arthropod-borne diseases remains complex.

The most common arthropod-borne diseases in the U.S. include Lyme, Anaplasmosis, Babesiosis, Powassan and West Nile virus. Accurate diagnosis is extremely important, as the worst thing is to hear “you’re OK, we did not find anything wrong” when you do not feel OK. For this reason, it is advisable to use a laboratory for testing that specializes in the detection of these diseases.

Why arthropod-borne disease diagnostic testing is so important:

In most cases, the clinical symptoms of arthropod-borne illnesses are non-specific and can vary from mild body aches to severe brain complications including seizures. As few signs and symptoms are specific to any one disease, differentiation by appropriate laboratory testing is critical when considering treatment options. Unfortunately in cases where infection goes undetected, survivors can be left with debilitating and chronic effects lasting a life time.

Many arthropod-borne illnesses share common, overlapping symptoms. For example: you may think you simply have a flu that does not go away or blame your immune system or seasonal changes. It is common in cases where the cause of symptoms is an arthropod-borne disease, that the illness goes undiagnosed or is confused with something else. Testing is in fact the only way to be certain.

Headed by Dr. Konstance Knox, world-renowned virologist, Coppe Laboratories performs priority arthropod-borne disease testing and delivers clear, meaningful results to physicians with an improved turnaround time compared to other speciality testing labs (10 days or less). In addition, Coppe Laboratories is the only commercial laboratory in the U.S. offering Powassan virus testing, a little-known tick-borne virus than can be transmitted by a tick bite to a human within 15 minutes. Coppe’s experienced team is available to discuss and assess complex patient cases with physicians. At Coppe, their approach is to help patients take advantage of cost savings by delivering more meaningful results through elimination of unnecessary or redundant testing.

Learn more about Coppe Laboratories’ Arthropod-borne disease testing. All patients are treated as priority, however in cases of suspected exposure immediately prior to or during pregnancy it is particularly important to get tested early.