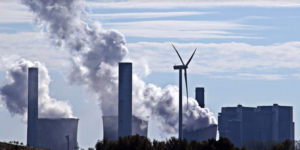 Cities have known about air quality issues for decades, with some cities issuing guidelines daily to warn residents about the daily quality and risks of the air that they are breathing. Air pollution is now considered a global threat, with more and more dangers appearing every day. Pollution, in general, caused 9 million deaths; between 6 and 7 million of those deaths are directly related to air pollution and quality. If no action is taken, scientists say that number will double by 2050.

Although the vast majority of air pollution is manmade, it’s important to acknowledge that a few sources are created through the natural processes of plants and animals. The most famous example here is the methane gas that ruminants expel during digestion – farts, and burps, basically. Active volcanoes expel ash and smoke, and certain plants release volatile organic compounds on warm days.

It’s important to acknowledge these sources of pollution since they are often used to discredit the clear and obvious links between manmade pollutants and air quality.

There are numerous sources of air pollution that are manmade. Just a handful of examples are vehicles like planes, trains, and cars that burn fossil fuels, and countries that dung, compost, and wood as power and heating fuel. Pesticides and other farming chemicals create air pollutants, as do products with solvents, from paint thinner to personal care products. And decaying waste in landfills is a far bigger source of methane than any cow can produce.

We have known for years that poor air quality can lead to neurological diseases; there have been links made between strokes and dementia, for example, though controlling for other risk factors is nearly impossible. But the University of Chicago recently created an index that shows how many years on average are being taken off life expectancy due to air quality. South and East Asia, in particular, are seeing between 2 and almost 5 years taken off the life expectancy of their population, especially in their urban areas. On average, air quality takes more years of life than tuberculosis, HIV/AIDS, and cigarette smoking.

The most dangerous source of air pollution is fine particulate matter; these molecules are so small that they can be inhaled, and can lodge within the lungs. This can aggravate existing lung issues, like COPD or asthma, and increase the fatality rates of heart diseases and cancers.

Danger increasing around the world

According to BetterEarth.com, the most polluted cities in the world are in the Middle East and Southeast Asia. While the United States, in general, has moderately good air quality, there are places where that appears to be changing. For example, the air quality in California and the American West is being badly affected by the wildfires that rage there every year. This year, the fires in Paradise spewed out so much smoke that some schools had to close, and professional level sports teams had to cancel their practices. The air quality was equivalent to that in Beijing, China, where residents are routinely advised to wear air masks to avoid inhaling the dangerously smoggy air.

Scientists also warn that changing climates mean that these sorts of wildfires are likely to become more common, and that it will be important to mitigate these disasters as much as possible in order to maintain air quality.

How do we make changes?

There are a few changes that can be made on a personal level to improve air quality, such as:

But the biggest changes for pollutants need to be made at a government level. Individuals can:

Since the majority of pollution comes from cities, it makes sense for cities to lead the charge in reducing their particular emissions efforts. For that to happen, however, cities need to understand their particular problems. New York, for example, found that buildings using dirty heating oil were causing far more pollution than their cars. They created targeted regulations to deal with this problem and to improve their air quality.

We often think of climate change as a problem for the future, but air quality is a problem right now, and a problem that is continuing to worsen. By working to improve air quality now, we protect children, the elderly, and those who are vulnerable to lung problems due to pre-existing conditions. We also reduce the conditions that are causing global warming and climate change, mitigating some of those dangers.

Types of watery discharge and how to ease the discomfort.

At What Point Are Drug Tests Used in Child Custody Cases?