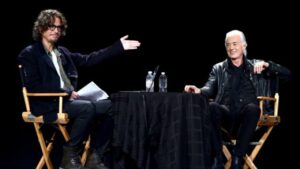 There have been many bands that have been compared to Zeppelin over the years, but there can only be one original of course. One of those bands of course is Soundgarden, and Chris Cornell recently had a meeting of the minds with Zep mastermind Jimmy Page.

As Rolling Stone tells us, Chris and Jimmy got together to coincide with the release of the photo book, simply titled Jimmy Page. Page told Cornell that he planned Zeppelin to be “a guitar tour de force, but not at the expense of the other members.” And the first time Page got a gold album was a big moment, as it would be for any musician.

“I’d heard about gold records and seen Elvis Presley’s album.” When he got a gold record himself, Page thought, “Hallelujah, we got there.”

Page also mentioned that Zeppelin recorded while they toured at various studios so the label couldn’t come in and meddle with their music. The first album “was recorded, and then it was taken to the record company. That’s why we were able to say ‘no singles.’” (In fact, as much as we constantly hear Stairway to Heaven everywhere, it was never released as a single at the band’s insistence.)

Page hopes to have new music out into the world next year, and he told the Q&A audience, “The most important part is to be seen to be pl

Batman the TV Show Is Finally Back