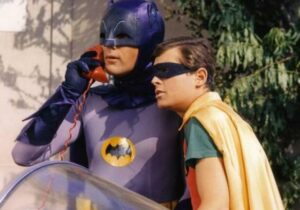 It’s a moment many of us geeks have been waiting for for a long time, and now it’s here. Batman the TV show is now officially available on DVD and BluRay.

In celebration of this special event, Adam West and Burt Ward have looked back on the show that made them famous, and made millions of young fans Batfans all over the world. And both West and Ward are glad that finally they can finally stop being asked when Batman will be out on DVD and BluRay.

Ward told USA Today there’s going to be a big push for the ’66 era Batman, with new comic books, toys, and a slot machine in Vegas.

West told the Associated Press that when he first read the pilot script, he said “Sign me up. I found it so funny, but so exciting for kids that I just wanted the chance to cook with that character.”

Yes West got stereotyped, and for a time he resented it, but he says, “Overall I’m delighted because my character became iconic and has opened a lot of doors in other ways too.”

West also had a good word to say about Ben Affleck taking over the cowl, telling Comicbook.com that Affleck “will be very good. He’s a fine actor and he’ll bring something fresh, which is what you have to do.”

Yet Ward said Adam was his favorite Batman of them all. “I thought every one of the actors who portrayed Batman in the feature films did a great job. But they were all actors. In my opinion, Adam was – is – the only Batman.”