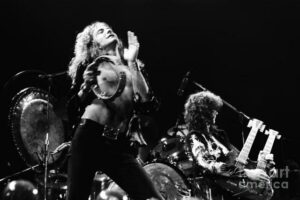 Some bands, no matter how much money they’re offered, are not going to get back together. The surviving members of The Beatles, ABBA, Guns N Roses, and Led Zeppelin can all write their own check if they want to cash in and do a reunion, but it’s just not gonna happen.

So a report came in that the surviving members of Zeppelin were offered a whopping $800 million to get back together, and Robert Plant has dismissed this story as “rubbish.” In fact, according to Blabbermouth, that was Plant’s only comment on this story, one word: “Rubbish.”

As many Zep fans know, Jimmy Page would still love to do a Zeppelin reunion, but Plant doesn’t want to go there, which is the primary reason it hasn’t happened. And truth be told, the band was heading downhill when they were still together. In Led Zeppelin: The Oral History of the World’s Greatest Rock Band, written by Barney Hoskyns, a source close to the band didn’t think the band would have held together towards their end in the late seventies, whether drummer John Bonham died or not.

Again, we’ve said it before, we’ll say it again, there’s something to be said for bands to have respect for what they’ve accomplished, and not cheapen it with a quick cash grab. Some bands can come together again and deliver great music again, but many can’t, and should leave the past where it is. Although we have to say we would have loved to have seen the Zeppelin Guitar Hero game, but Page said nix.

Evil Dead the Series is Coming