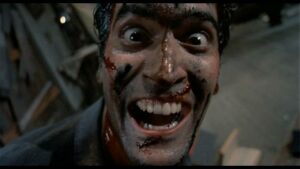 Evil Dead is a beloved horror classic, and it was of course successfully remade last year. With genre TV making a big comeback, especially in the age of The Walking Dead, why not an Evil Dead series, right?

The series will be on Starz next year, and as Deadline tells us, it will be called Ash Vs. Evil Dead. The original Evil Dead gang, Sam Raimi, Rob Tapert, and Bruce Campbell, will be executive producing.

As Raimi said in a statement, “Evil Dead has always been a blast. Bruce, Rob, and I are thrilled to have the opportunity to tell the next chapter in Ash’s lame, but heroic saga. With his chainsaw arm and his ‘boomstick,’ Ash is back to kick some monster butt. And brother, this time there’s a truckload of it.”

What’s awesome about Evil Dead is that in a day and age where people take zombies more seriously than ever, here’s some good, old fashioned monster fun that doesn’t need any social or political context to deliver the goods.