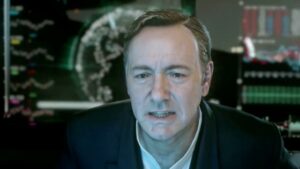 We recently reported that Kevin Spacey has recently made a major star turn, not in a movie, but in Call of Duty: Advanced Warfare, where he plays a bad guy. It’s hard to put Spacey and gaming together, but here he is in a digital avatar in one of the biggest game franchises in history.

While The Daily Beast considers Spacey in the game “distracting,” because they apparently feel he has too much baggage as a movie star. “In a film, the presence of a well-known actor is also a distraction, but it’s an accepted part of the cinema experience. The best performances can make you forget that you’ve seen a person before, but this is a limitation of reality and not a benefit.”

Not to mention the Beast feels “video game technology isn’t good enough to accurately render photorealistic faces. It’s the so called ‘Uncanny Valley,’ where things are close enough to realism that they start to become uncomfortable.”

Yet Cinema Blend gave the game four stars, calling it “much more inspired and unique than the past few years’ games,” and Spacey’s character, “the slimy CEO of a private military company, appears just enough in the story to give players a tangible enemy.”

While The New York Times wasn’t nuts about the game overall, it also called Advanced Warfare “visually astonishing, with the best video game faces I’ve ever seen…[Spacey] brings a subtlety to his performance that is rare in video games, conveying his character’s villainy with calm certitude rather than rantings.”