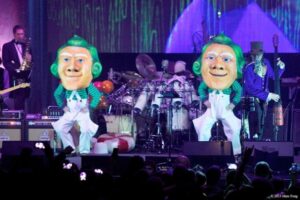 It’s one of the most beloved children’s stories of all time, and while neither movie adaptation was as good as the book, the first Willy Wonka movie is also beloved by many.

While I always felt the music in the ‘70’s Willy Wonka veered from decent to terrible (it always irked Sammy Davis Jr that “The Candyman” was one of his biggest hits), Primus are paying tribute to the film with their latest album, which will include special golden tickets like Wonka himself gave out in lucky candy bars.

As Rolling Stone tells us, the band’s album Primus and the Chocolate Factory With the Fungi Ensemble, was released on chocolate colored vinyl, as well as golden vinyl. And for the lucky fans who get the right album, a golden ticket that gets you into Primus shows for life.

Primus bassist vocalist told Stone the reason why the band covered the soundtrack is, “We need to make sure that kids in the future watch the original Willy Wonka and not the horrendous, horrible remake that came along and left the taste of feces in our mouths.”

Tom Hardy May Come to X-Men as Apocalypse