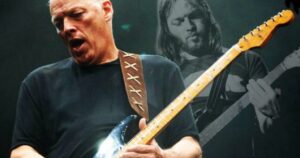 While we were under the impression that Pink Floyd with or without Roger Waters was essentially done, the band has a new album coming out, The Endless River, on November 10, their first in twenty years.

Rolling Stone tells us it’s an instrumental album that’s four sides long. (Remember sides?) Apparently the songs were taken from The Division Bell sessions in 1994, and Gilmour wanted to go back and revisit the music after keyboardist Rick Wright passed away.

As Stone reports, Gilmour’s guitar skills really shine on this album, and the “new album snippet puts the guitarist’s unmistakable soloing in the spotlight. The guitar sound is unmistakably Gilmour’s, and it still radiates as brightly as it did on Shine On You Crazy Diamond.”

At first it was confusing to read of a new Pink Floyd album because Gilmour did his solo album On An Island in 2006, that was certainly very Floyd-esque (big surprise), and he told Guitar World the band was pretty much done. So it will be interesting to hear the band without vocals and lyrics, which is a shame considering Waters is an incredible wordsmith, but Floyd always had good instrumentals, and we’re hoping the rest of the album lives up to its promise.

Inherent Vice Not So Nice?

Guardians of the Galaxy DVD / BluRay To Include Avengers 2 Preview