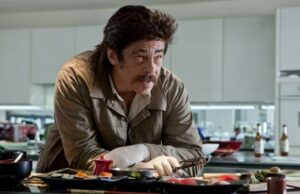 If you love modern indie film, chances are extremely good you’re a Paul Thomas Anderson fan. For those unfamiliar with the joys of PTA, he’s the writer / director who gave us Boogie Nights and There Will Be Blood. Now he’s back with Inherent Vice, an adaptation of the Thomas Pynchon novel.

The first reviews are in, and the consensus so far seems that the film was a missed opportunity. Like Paul Thomas Anderson’s previous film, The Master, you get the impression the film is a head trip, yet Vanity Fair calls it “too stoned for its own good….a little too zonked, meandering and overly long, an ultimately pointless story told by a stoned person. I realize that’s kind of the point, but it makes for eye-itching viewing.”

The film tries to capture a disillusioned America in the ‘70’s, when we realized the ideals of the sixties probably weren’t going to come to pass. Variety liked the film, calling it “a groovy, richly funny romp…Not for all tastes, this unapologetically weird, discursive and totally delightful [film]will repel staid multiplex-goers…but a devoted cult awaits…” The Daily Beast also called it “bizarre stoner noir,” and headlined their review, “There Will Be Spliffs.”

Like just about every PTA film, except Blood, which was a Daniel Day-Lewis tour de force, Vice has a great ensemble cast that includes Joaquin Phoenix, Josh Brolin, Benicio Del Toro, and Martin Short.

Do we really want Google to be the Internet police?