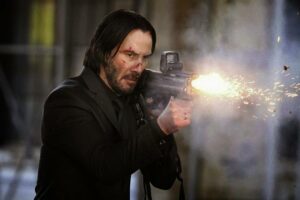 John Wick was a big surprise sleeper movie last year that finally brought Keanu Reeves’s career back on track. While the simple, one line synopsis makes it sound like a standard issue revenge film, it was done with great style that set it apart.

Cinema Blend tells us that a sequel for John Wick is in the works, and Chad Stahelski and David Leitch, who created the film, are working on ideas every day. As Stahleski said, “We want to make sure we have a story and a character that everybody loves and then we’ll dress it with action that we promise will be awesome.”

Aw, what the hell, yes character is important, but it’s the action everybody wants to see with this, and everybody who loved the first film wants to see Keanu kicking some serious ass. We agree with Stahleski that you have to like the character in an action film, and it’s nice to see the audience likes Keanu again.

As for topping the original, Stahleski told Screen Rant, “Without blinking twice we know we can outdo the action from the original.”

Astro Boy Movie in the Works

Varonis Could Have Prevented North Korea from Getting Sony CEO Fired