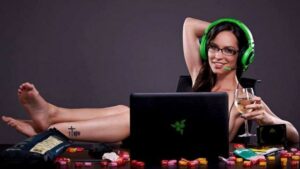 In recent years, women have gotten into geek stuff more than ever. They love playing video games, Star Wars, and many other things we thought only pasty, doughy males with no life enjoyed. Now a new report tells us they may be outnumbering male gamers by a wide margin.

How big of a margin? According to The Independent, which cited a census from Populus for the Internet Advertising Bureau, women account for more than half of gamers in the UK. At first, it was 49% of women were gamers, but in the last three years it’s now up to 52%.

It’s great to see the numbers for female gamers are on the rise here and aboard, there was even an avowed gamer Playboy centerfold, Pamela Horton, who loves League of Legends. Horton told Joystiq, “I’m not materialistic, I don’t dress up all fancy and I don’t know any designer names or anything like that. If you give me $300, I’m going to go to GameStop.

Apple claims even they can’t crack an iOS 8 device