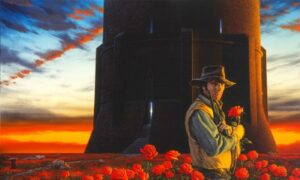 It was set up, and fell apart, at two separate studios, and we figured that the long planned adaptation of Stephen King’s The Dark Tower was dead. Now it’s finally happening, or at least it’s set up to hopefully be made at Sony.

At first The Dark Tower was set up at Universal, who passed at the last minute, then it wound up going nowhere at Warner Brothers.

Collider tells us that the plan is like before, where there will be a series of movies, and a TV series as well. According to Deadline, Ron Howard will no longer directing, but he will be producing, and the first installment will be based on the first book, The Gunslinger.

We were very excited when The Dark Tower movies were announced because we felt it would be a very ambitious undertaking, much like a movie version of The Stand. While we’re still nowhere near out of the woods with The Dark Tower, we were convinced it was done for good, so this is definitely encouraging news. (No word yet on whether Javier Bardem is still in to play the lead or not, but we’ll be watching all developments closely.)

The New Fantastic Four: What The Thing Looks Like

Fast and Furious Director Up to Helm Aqua Man