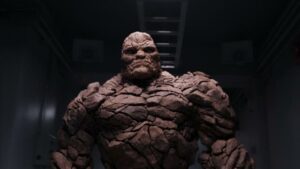 One of the best loved members of The Fantastic Four is of course, The Thing, and with the new reboot coming this summer, everyone wants to know what the new model Thing will look like.

Well the picture has finally been unveiled, and he looks just the Thing we all know and love. You know there won’t be any huge variation away from The Thing’s classic design, and again, he looks just like we expected him to.

As Empire tells us, Jamie Bell isn’t playing The Thing in a rubber suit, this flick is going the motion capture route, which in this day and age makes a lot of sense. Josh Trank (Chronicle) directed the new Fantastic Four, and as he told Empire, Bell is “a tough guy in real life. He exudes this strength. He’s Reed Richards’s best friend in the archetypal, spiritual way, and you want that character to have that warmth and that strength.”

Now that Daredevil finally got a long overdue reboot, we’re hoping there will finally be a great Fantastic Four movie as well. Look for The Fantastic Four in theaters on August 7.

The Dark Tower Now Set Up at Sony