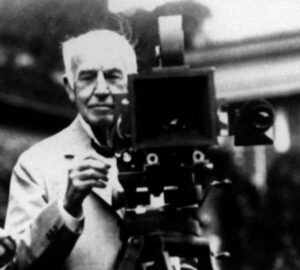 Star Wars The Force Awakens wrapped last year, and while it remains to be seen if JJ Abrams will be able to reinvent the franchise like he did with Star Trek, he’s only directing one movie in the series, which is definitely more than enough work for any filmmaker to take on.

As we all know, JJ always has a lot of projects he’s juggling, and The Wrap tells us that he may be taking on the life of Thomas Edison next. The project is set up at Paramount under Abrams’s Bad Robot company, who just renewed their deal with the studio.

As we often see in Hollywood, there is another Thomas Edison movie in the works, the other one is set up at the Weinstein Company, although we doubt we’re going to see dueling Edison movies at the nation’s theaters. Then again, we’ll have two Steve Jobs movies total by the end of the year, and it would be great to see the story of Edison come to the big screen, whoever gets their movie ready first. (After all, there would be no Steve Jobs without Edison’s innovations.)

Ironically enough, now that we think about it, with the TV show Revolution, JJ did a good job of coming up with the scenario of there being no power at all, and we’d like to think that Edison would have a good chuckle with this. Wherever his spirit is now, Edison must also love that his story could eventually become a movie, because with creating the movie camera, he helped launch one of the biggest industries in the world.