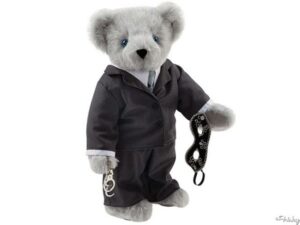 While a lot of men frankly couldn’t care less about Fifty Shades of Grey, a lot of women are certainly looking forward to it, and it’s going make a ton of money. While the movie got the R rating, it does have a reported twenty minutes of sex in it.

As a number of reports tell us, this is out of a movie that’s a hundred minutes long, so that’s quite a margin for sex in a mainstream film. As we’ve reported here on TG, the film of course got the R rating, but in England nobody under eighteen will be allowed to see it. (The ratings system is actually even stricter over there than here.)

Variety has also pointed out to us that there is going to be Fifty Shades merchandise, and why not? It made a ton of money for Star Wars, right? We know the books will be flying off the shelves, although who hasn’t read it by now, but there’s also Fifty Shades wine, clothes, blindfolds, and a Fifty Shades teddy bear you can get through The Vermont Teddy Bear Company.

Fifty Shades of Grey is out on February 13, right before Valentine’s Day.

Can Lenovo Do With x86 Servers What IBM Could Not?

The Agony of the Lego Movie Losses