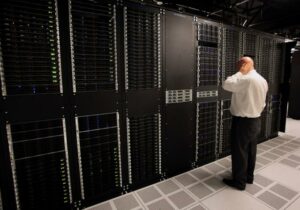 The question in my title isn’t about turning around the IBM’s System x unit. Lenovo has already showcased that they can do just that with their IBM PC Company acquisition and their record of taking that unit to worldwide market share leader.  What I’m talking about is connecting the dots to have the x86 and PC units be synergistic so that there is an advantage in buying end to end Lenovo solutions.

Other than discounting bundles that include both product classes, every vendor that deliver Intel-based PCs and servers has had trouble creating solutions that fully blend the technologies. This is problematic because without that synergistic blend, cloud service providers may well provide a better end to end solution displacing a lot of server sales over the next few years.

Computing as a Service

The enterprise IT market appears to be moving back to the concept of the original mainframes where computing capability is sold as a service.  Back in the 80s and early 90s most firms didn’t own their equipment; they leased it and paid for software and services as part of that lease of computing paid for by the month.

This provided significant advantages for the buyer since it eliminated most related capital expense over and above the physical building where the equipment resided. It was also a great model from the seller’s perspective since they got an annuity and a revenue stream that was almost invulnerable as long as they kept the customer happy. Back then, IBM literally had customers for life.

Both Amazon and Google are demonstrating an increasing capability to supply computing as a service in a similar beneficial model.   Google with its Chrome and Android OSs and Docs productivity products are increasingly wrapping these offerings with back end services so that users shouldn’t need to run local content.

Amazon has mostly separately focused on the data center via its AWS services and the consumer market with its Kindle and Fire TV. But those offerings could increasingly be blended and moved to desktop and laptop configurations and supply, for a very low entry price, what many may come to believe is a complete PC experience.

To combat this a vendor would need to provide a leased on-premises solution bridging servers, networking, storage and client devices (PCs, tablets, and smartphones) that would make use of related complementary services.  Tradeoffs would likely include significant cost savings over local customer control, which is often acceptable for many larger companies and government organizations.

With both Dell and HP currently lacking viable phone products only Lenovo has the full breadth of end to end offerings ranging from smart phones (Motorola), tablets and PCs to storage, networking, and servers, at least on paper.  Right now, the company’s networking and storage portfolios are light. But Lenovo is far better equipped with mobile devices than any other player in their class and they can and do partner with companies like EMC and IBM to close product line gaps in other areas.

Lenovo also has the parts to run against Amazon and Google with an alternative model that stresses the advantages of an on-premises solution. This seems like a better avenue than trying to compete with either of those companies in the cloud where Lenovo would initially be overmatched.   But the company’s end-to-end portfolio offers a unique opportunity that would allow its executive management to fight with the full resources of the firm and overmatch competitors that lack of product breadth or follow more typical siloed approaches to the market.

Wrapping Up:  Redefining the Market

Lenovo is building a very unique company; one with the product breadth to counter Amazon and Google not by building a better cloud service but by creating a true alternative model that would be more attractive to most large companies then a pure cloud play can ever be.    If the company can pull all the parts together, it could redefine the competitive landscape around an updated version of the highly successful model IBM used in the 50 years ago to dominate the IT market.  No other company has the breadth or potential in this regard that Lenovo does. It just has to see the opportunity and execute.