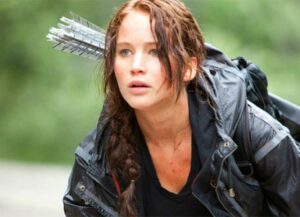 In addition to being one of the biggest actresses in the world, Jennifer Lawrence is a huge Dumb and Dumber fan, so you’d figure she could ask for a cameo in the sequel, and it would be no problem, right?

Well apparently she did a cameo in the film, and it was taken out, at her request surprisingly enough. According to Vulture and The Hollywood Reporter, she had veto power over whether it would make it to the final film, but the Farrelly Brothers deny this.

According to Vulture, Lawrence’s role was a young Fraida Felcher, and her scene was shot in Georgia. No word as to whether this could be on the DVD / BluRay or not, but we’re willing to bet it will leak to You Tube soon enough.

Bobby Farrelly told Cinema Blend that Lawrence was in the area shooting Hunger Games, and apparently the scene just didn’t work. (Kathleen Turner plays the older Freida.) Still no official reviews in yet for the next Dumb and Dumber, but we do hope it delivers plenty of laughs this weekend.