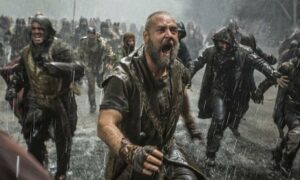 In recent weeks, I saw the term “cli-fi” being used to describe Interstellar. I had no idea what this term meant, but then I realize “cli” was short for “climate,” because in Interstellar, the world is in bad shape thanks to global warming.

We had no idea there were even Cli-Fi awards, but the Wrap informs us there are, and Darren Aronofsky won best screenplay for Noah. Even though Noah is a classic story from the Bible, many have noted it also speaks a lot to today’s environmental problems as well.

As The Wrap explains, the Cli Fi Movie Awards are called “The Cliffies,” and other films, like Godzilla, and Snowpiercer, are also considered Cli Fi as well.

So we have the feeling Interstellar should be the big winner next year for the Cliffies, and we’re also looking forward to the global warming debate the movie should inspire as well. Frankly, we didn’t even realize Noah was considered a “cli-fi” movie, although when you think about it, other sci-fi movies of the past dealt with the environment as well. (Silent Running, No Blade of Grass, Soylent Green, and Waterworld come to mind in this regard.)

The Six Million Dollar Man to Finally Become a Movie