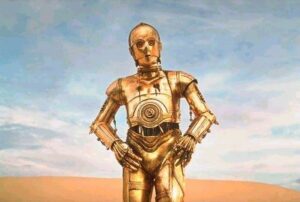 Whenever anyone says the next movie in a series is the best yet, we’re obviously dubious. Wasn’t Attack of the Clones supposed to be the big Empire Strikes Back style comeback for the series? Well, now C3PO himself is claiming Episode VII could be better than Empire.

This of course we’ll have to see for ourselves when the movie’s out in theaters next December 18, but as Daniels has said on the net, “’No movie sequel is better than The Empire Strikes Back.’ You might eat those words for Xmas dinner in 2015. Joy & Indigestion to the world!”

As anyone with half a brain knows, nobody’s going to say a movie blows before it comes out, unless they want to get sued, and if the next Star Wars sucks, nobody’s going to want to have it ruined this far in advance. There is indeed always the hope that Star Wars could get back on track, especially now that Lucas is no longer in control of it.

So we hope Anthony Daniels is correct, but Empire is probably just impossible to top. Then again, who ever thought when they first saw Star Wars that the next one in the series could top it?

Why Man of Steel Didn’t Have an End Teaser

Activision Blizzard Has a Big Year