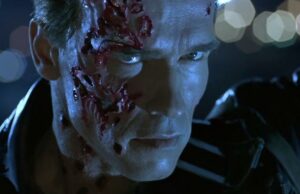 Megan and David Ellison, the offspring of Oracle founder Larry Ellison, have bought the rights to the Terminator series, and part of the deal is they had to get a movie made by 2018 before the rights deal ran out. Well, the movie has wrapped, Terminator Genisys, and it’s due for release on July 1, 2015.

Yet there’s already concern, thanks to a cover story on the film in Entertainment Weekly, which reports that in this film Sarah Connor “was orphaned by a Terminator at age 9. Since then, she’s been raised by (brace yourself) Schwarzenegger’s Terminator – an older T-800 she calls ‘Pops’ – who is programmed to guard rather than to kill. As a result, Sarah is a highly trained antisocial recluse who’s great with a sniper rifle but not so skilled at the nuances of human emotion.”

Excuse us? Is this really the plot of the next one? We figured they would try to break away from the previous Terminators, and do something in the “Terminator universe” as they say, but trying to break away this far from the beloved first films could be a big mistake, especially having Connor being raised by Schwarzenegger, and her calling him “Pops.”

We’re still also trying to figure out if maybe this happens in an alternate universe, like in Back to the Future 2, or if indeed Terminator history is going to be completely rewritten here. So let’s try and hope for the best, but this is fairly alarming news already, and we hope it won’t leave a stick in the craw of the fans, because Paramount wants to make two more of these Terminator flicks and relaunch the franchise, and they could be getting off on the wrong foot here.