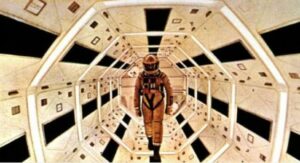 2001 was a remarkable step forward for the sci-fi genre, and the movie that made many want to become directors, including James Cameron. Now 3001: The Final Odyssey will become a miniseries for Syfy, with Ridley Scott producing.

3001 was the final chapter in Arthur Clarke’s space saga, and The Hollywood Reporter tells us that the estates of Stanley Kubrick and Clarke are in full support of this mini-series. Stuart Beattie, who wrote Pirates of the Caribbean and Collateral, will write the adaptation. (As far as we can tell, there’s no director attached yet.)

Syfy is also working on an adaptation of what’s considered Clarke’s best work, Childhood’s End, as a six hour mini-series as well. As we’ve seen with today’s TV and miniseries, there’s much longer story arcs where you can tell an epic story in the time needed, without having to cut it down to feature length.

While nobody could ever match the incredible epic of Kubrick’s sci-fi masterpiece, we’re definitely willing to give this one a shot, and along with Childhood’s End, we’re definitely curious to see what adaptations of Clarke’s novels could look like today.

Is This the Plot For the Next Terminator Movie?