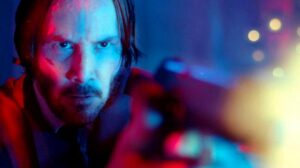 Okay, so Keanu Reeves isn’t our greatest living actor, we all know this. But he’s definitely still got some audience goodwill from The Matrix, Speed, and of course Bill and Ted. Now he’s got another new flick coming to theaters that could be another winner on his resume.

At first, John Wick would sound like a tired scenario we’ve all seen a million times: A revenge movie about a hitman. Gee, never seen that before. But the reviews for this one are pretty strong. John Wick has gotten a 90% approval rating on Rotten Tomatoes, and the Hollywood Reporter tells us “satisfaction [is] assured…Reeves resoundingly returns with an effortless, kinetic style that positions the film extremely well for any potential follow-ups.”

SFGate tells us the film “delivers non-stop action,” and Moviefone tells us, “you need to go see the movie yesterday.” The Wrap reports that the film “burns with brisk, bloody, bruising,” and the Huffington Post writes, “This is an action, adventure film with a limited plot, but creative visual effects that make the action vivid and visceral.” Lastly, Variety tells us that Wick is “pure revenge-movie gold, as Reeves reminds what a compelling action star he can be…a clean, efficient and incredibly assured thriller with serious breakout potential.”

So again, we know that Keanu isn’t giving Laurence Olivier a run for the money, but if he’s got another cool movie out there to enjoy, we’ll be first in line just like everyone else. You can also relive John Wick in the video game Payday 2, where Wick is one of the characters.