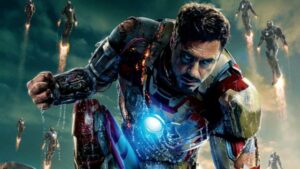 We’ve got two more Avengers movies coming up, maybe even four of them if the rumors are true that they will be split into two parts, but many are still wondering about a fourth Iron Man flick.

As far as we’ve been able to tell, there probably won’t be a fourth Tony Stark installment, but Robert Downey Jr has just told Deadline he’d do it, if Mel Gibson directs. “That would be bananas.” But of course, this was all said facetiously, and we doubt any major Hollywood studio will still touch the guy with a ten foot pole, even though there are some people in the pro Mel Gibson camp. (Deadline, for whatever reason, has been especially Gibson friendly with their reporting.)

As for why he’s not coming back for a fourth Iron Man, Downey says, “To me, it’ comes down to what’s the half-life of people enjoying a character? It’s different on TV, where you expect the longevity over seasons while movies get a two or three year break…But I’m not 42, I’m turning 50 and now I’ll have two small kids instead of one grown one, and eight Team Downey projects with people who are imagining I’m not just spending Warner Bros’ money out of vanity, but that I’m taking it seriously.

Alien: Isolation Reviews Are In

IBM and NVIDIA Partner to Make OpenPower a Real Threat