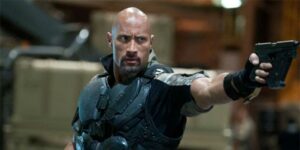 Some time ago, we reported that Gilligan’s Island the movie was in development at Warner Brothers. A sad state of affairs for sure, but not surprising considering Hollywood’s been out of new ideas for decades now.

So now another franchise revival nobody wanted may come to pass: Baywatch the Movie. And that’s not all. It’s going to star The Rock.

Yeah, yeah, we know what you’re thinking…it’s a goof on it, it could be really funny like 21 Jump Street, etc. But like Gilligan’s Island the Movie, we’re still thinking this is pretty pointless. You may recall Howard Stern did a similar goof on Baywatch, Son of the Beach, which was alright, and it didn’t add to the needless remake pile that’s growing to the moon.

As the Hollywood Reporter tells us, Paramount’s been trying to make a Baywatch movie for years, and for God knows what reason, they’ve gone through a succession of writers and directors trying to get this off the ground. (Hard to imagine this one being that tough to crack.) So that’s what the Rock’s got cookin,’ but like a lot of movies announced in the trades, like Gilligan’s Island, we’ll see if this ever gets made, or gets stuck in development hell.

Alien: Isolation Reviews Are In