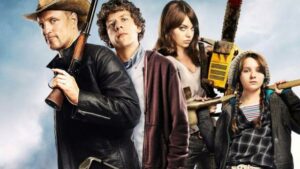 It seems that zombie mania is really hitting now that the fifth season of Walking Dead is nearly here. First the news hits that the movie adaptation Dead Rising is currently filming, now the word is out that Zombieland is getting a sequel.

This isn’t a big surprise. Like most modern zombie stories, the film did very well, but it’s taken quite some time to get another Zombieland up and running. Now Deadline tells us that David Callaham, who also gave us The Expendables and the recent reboot of Godzilla.

It’s unclear if the original cast will be back, which included Woody Harrelson, Abigail Breslin, and Jesse Eisenberg. However, Ruben Fleischer, should be back to direct. It’s also not sure why Sony is so hot to get another Zombieland movie up now, but we’ll see if the fans will be back by the time a second go-round is ready.

Celebrities that are suing Google are idiots!