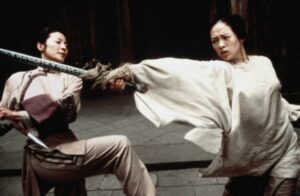 As Variety reports, Cinemark, Carmike and Regal, are already saying they’re boycotting the movie. And that’s just in the U.S. Cineplex in Canada, and Cineworld in Europe won’t play it either. A spokesperson for Regal said it wants to show movies “on a grand scale…we will not participate in an experiment where you can see the same product on screens varying from three stories tall to 3-inch wide on a smart phone. We believe the choice for truly enjoying a magnificent movie clear.”

If you want to see the movie on a gigantic screen, this sequel will also get an Imax run, and as the CEO of Imax told the Hollywood Reporter, “I knew it wouldn’t work for some people. In understand that people are reluctant to change, but if you look at our track record, everything that we’ve done has ultimately benefited the box office. If we sat on our hands, there would be no Imax.”

The Crounching Tiger sequel will be released in theaters, and simultaneous stream on August 28, 2015.

Tetris Will Be a Movie

Police and government confused and frightened by encryption