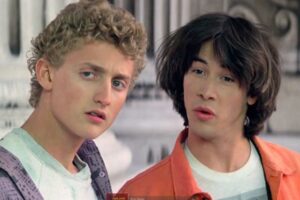 So Alex Winter told Rolling Stone that the third Bill and Ted will be “really f*cking funny,” which is good to know, because that’s what we want it to be. He added that the film will have “many versions of ourselves…[it’s] answering the question: ‘What happened to these guys?’”

While the third movie is also going to be “really sweet,” it’s still Bill and Ted through and through. Sounds good to us, so what’s the holdup? Money, of course, which leaves a lot of movies stuck in development hell. Maybe Winter can launch a Kickstarter campaign?

Either way, we’re patient, and however long it takes, we’ll be there when Bill and Ted 3 hits theaters.

How the Star Wars Empire Was Built

The Last of the Clone Wars