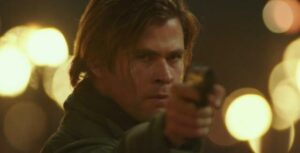 As a longtime fan of director Michael Mann, I’m always hoping he’ll make a great movie again after a series of mis-steps. (How can anyone screw up a sure fire bet like Miami Vice the movie, especially the guy who created it?)

Yet Mann has now taken on an interesting world of crime that’s far removed from the streets of L.A., Chicago, or Miami. With Blackhat, he’s taking on cybercrime, and Chris Hemsworth, best known as Thor, will be his anti-hero.

Often the best way to catch hackers is to enlist hackers to help, and as Entertainment Weekly tells us, in Blackhat Hemsworth is a jailed hacker who may be the only one who can help the feds catch another cyber criminal who caused a nuclear meltdown. If Hemsworth can find the guy, the feds will cut him a deal.

The title is in reference to blackhat and whitehat hackers, a reference to old westerns where the good guys wear white, and the bad guys are in black. As Mann explained to EW, it doesn’t take much for the world to unravel, and the wrong person at the helm of a laptop can do tremendous damage in mere seconds.

Did Disney Copy Frozen from Yearnings of the Heart? Nope