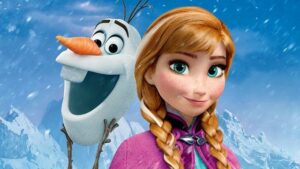 This seems to be getting a lot of ink today and there was a similar controversy surrounding Disney’s animated movie Atlantis and a Japanese anime called Nadia.  Nadia had around 39 episodes so there was a lot of content.  But when you analyzed this back to Jules Verne’s 20,000 Leagues Under the sea, which Disney also made a movie of, it appears the connects are from both efforts back to that story and not each other.  Frozen is formulaic with elements common in many stories of its type so naturally there will be similarities.

The connections do appear a bit forced.  Arendelle was a kingdom and much of the story Frozen revolves around that dynamic in the book it is a village and there are no royalty elements.  Both stories have injuries but one is magical and not disfiguring and the other is disfiguring and not magical the disfigurement is a critical element in the book and would have made the romantic conflict that drives most of the movie (Anna’s poor initial choice is love) unbelievable.

Both injuries are cathartic to the story but they evolve uniquely from very different events.  One sister in the book dies in a severe accident, in the movie she sacrifices her life to save her sister and then is reborn the key element is the sacrifice missing in the book.  Finally she makes a connection between the songs and her book that is incredibly tenuous, “through various sources, I am aware that writers in the music industry have taken portions of my stories to develop songs for popular artists and these writers may have corroborated with the writers of ‘Frozen’”.

If you look at how Frozen was written (they pulled elements like the talking deer from this story and the skates but the works are very different), the authors went to Norway where the story Snow Queen was written, for inspiration some of the elements like the placement of the kingdom fall out (Norway is a mountainous country with lots of snow and ice).

While there are clearly some common elements I don’t think this reaches the level of plagiarism because the major aspects that appear to turn the book and the movie are simply too different and the claims appear too forced.

This is pulling a lot of ink and likely helping sell a lot of books but the foundation of these claims appear to be too tenuous to prevail.

iPhone 6 Not So Bendy Afterall