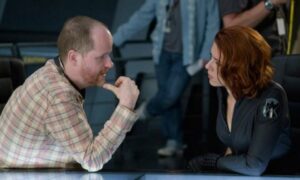 Joss Whedon should be a hero to feminists everywhere. He’s always been big on strong female characters, whether on Buffy or Firefly, and at one point he was also up to direct the movie version of Wonder Woman.

Whedon just spoke to Buzzfeed and the Hollywood Reporter about the upcoming Captain Marvel movie, which Marvel has in the works for 2018. He didn’t feel the movie would “get any traction, honestly,” even though Guardians of the Galaxy “might have helped it,” and he finally joked, “If a raccoon can carry a movie, then [Marvel executives] believe maybe even a woman can.”

Yes, even with the success of Hunger Games and Lucy, having a female lead superhero movie is still a struggle. As to whether he would direct Captain Marvel himself, Whedon said he wasn’t that familiar with the character, although it’s certainly good to see superhero stories with women in the works.

Previously in Digital Spy, Whedon said there was “genuine, intractable sexism” in comic book movies. “You hear ‘Oh, [female superheroes] don’t work because of these two bad ones that we made eight years ago,’ there’s always an excuse.”

Minecraft Has Its Own Festival