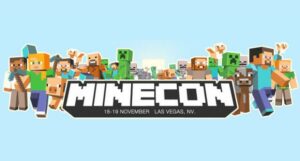 Did anyone have any idea there even was a Minecraft festival? I certainly had no clue until I saw that Minecon is an actual annual event, and it’s coming back again this year.

As The Verge tells us, Minecon is going to take place in London, with an expected turn out of about 10,000 people. Last year there was a Minecon in Orlando, where 7,500 turned up, and according to this report, the 2012 Minecon sold out in two hours.

The man who created Minecraft, Markus Persson, has turned a fun little hobby into an insane empire worth billions of dollars, and he even beat out Beyonce to buy a big pimpin’ home in Beverly Hills, reportedly the most expensive home in the area, worth $70 million. We find it amazing there’s even a Minecraft event like this, and it will happen the fourth of July weekend, July 4th and 5th, at the ExCel London Exhibition and Conference Center.

Jurassic World Has a New Dino in Town