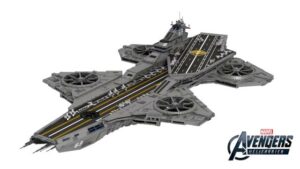 We just reported here on TG that there was a huge Star Wars auction in England, and a Bobba Fett action figure just went for a ridiculous amount, $27 grand. There’s also a new Lego Avengers Helicarrier toy that’s certainly nowhere near as expensive, but it sure ain’t cheap either.

As the site qz.com reports, this Lego is 3,000 pieces, and it will go for $349.99 retail. The idea to make a Lego Helicarrier came in to Lego’s Ideas site, where anyone can send in ideas for toys they’d like to see. Apparently if the idea goes forward, whoever comes up with the idea gets a piece of the action.

As qz.com reminds us, there’s other Lego collections that are just as pricey and intricate, like the Lego Death Star, which goes for $399.99, and the London Tower Bridge set, which will keep your kids busy putting 4,295 pieces together.

Whether you’re a kid or an adult who loves toys, the Helicarrier looks like a hell of a project to put together, but we’re sure kids that enjoy detail, and piecing Lego worlds together, will enjoy the hell out of this one.

When to Expect the Next Star Wars Movies