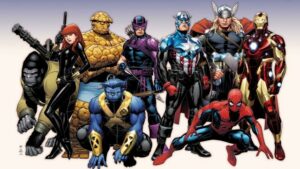 With the success of Guardians of the Galaxy this summer, and what’s sure to be a major slam dunk with Avengers Age of Ultron next May, Marvel is firing on all cylinders as the number one comic book company. This November the comics giant will also be celebrating its 75 years in the business with a special on ABC.

As The Wrap reports, the special is called Marvel 75 Years: From Pulp to Pop!, and it will be hosted by Emily VanCamp (Captain America: The Winter Soldier). The special will air on November 4 at 9 p.m. ET.

The special promises interviews, and a TV history of Marvel has its work cut out for it, especially considering how many great, iconic characters the brand created. Already one website has wondered if a teaser for Age of Ultron would be ready by the time this special airs, and it would certainly be a great platform to debut some early footage of the movie. (The DVD / BluRay release of Guardians will reportedly have a sneak look at Ultron, so maybe this special will give us a peak at it as well.)