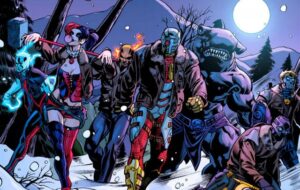 David Ayer is a Hollywood screenwriter who’s been in demand for many years because he knows the streets. He wrote Training Day, and End of Watch, and when Hollywood needs more true crime grit, he’s usually the writer to call.

Now the Hollywood Reporter tells us that Ayer is up to direct the big screen adaptation of DC Comics Suicide Squad, a super villain group that includes Deadshot, King Shark, Captain Boomerang, and the Joker’s lover, Harley Quinn. The twist of the story is that these villains go on missions that can possibly redeem them into heroes.

Suicide Squad has been in the works for several years at Warner Brothers, and it’s not a surprise this is in the works. Superhero teams are the hot thing for right now, and DC’s been working very hard to catch up to the Marvel juggernaut. Considering there’s only so many superhero teams, you gotta do some villains in there too. Bringing some tough reality from the streets could be an interesting twist that can help set this one apart.

Is Star Trek 3 Back on Track?

A Howard Stern Wack Packer is No More