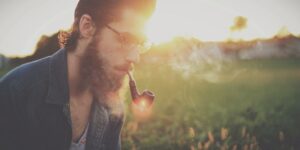 For some people, nothing compares to smoking from a good old-fashioned pipe. They’re available in all shapes and colors, they don’t need any ‘extra’ equipment, and they are pretty darn easy to use. The only thing a dry pipe doesn’t have in its corner is filtration…and that is where the bubbler comes in. Bubblers are what happens when a bong meets a traditional pipe, and they’re a great option for any smoker to have around.

Bubblers have a mouthpiece, bowl, stem, and water chamber. When smoke enters the chamber, the water cools it. This provides a nice, smooth hit like that of a bong. Some bubblers even have a percolator, which serves a second water chamber and allows for an even smoother hit. Your throat and lungs will thank you for using a bubbler!

Bubblers are very similar to regular pipes when it comes to ease of use and portability. The structure of a bubbler allows for glass blowers to use a lot of creativity. This is why glass bubblers are very popular among collectors. It isn’t hard to find a stunning piece when shopping for a bubbler, but keep in mind that glass ones can be a bit fragile.

Like glass bongs and pipes, Bubblers have a few different varieties to choose from:

Bubblers are one of the most affordable smoking devices. Price is dependent on the material, detail, and production method used to make it. For example, glass blown bubblers will typically cost more than those that have been mass produced. There are so many kinds of bubblers made in so many different ways, there is always a bubbler that can accommodate any budget!

5 Most Interesting Material-Based and Commodity-Backed Cryptocurrencies

Vaping: A Safe Choice or A Public Health Menace?