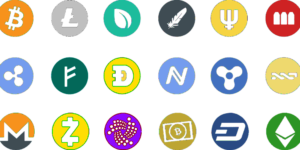 When most of us hear the words cryptocurrency or blockchain, we think of the digital world filled with intangible items that can be conceptualized but not touched. Very few of us explore the reach of blockchain technologies and their association with the physical world around us. Although cryptocurrencies are digital assets, they are being used to build, exchange and reimagine the physical world. Here are five of the most interesting material-based and commodity-backed cryptocurrencies on the market that relate to tangible items.

SolarCoin’s mission is to incentivize individuals by rewarding them for generating solar electricity. In doing so, SolarCoin will be able to reduce the payback time of solar installation, increase solar participation, and reduce the global carbon footprint.

GraphenTech is a blockchain company focused on the development of graphene. Graphene is the first two-dimensional nanomaterial produced by researchers. It is a material made of a single layer of carbon atom arranged in a hexagonal network. A unit of graphene is one atom thick and 150 times more than a unit of steel, making it the most resistant material in the world.

GraphenTech is developing a technology that will be patented and will allow the manufacture of graphene on an industrial scale at a competitive price. The mission of GraphenTech is to increase access to graphene, allowing its use in multiple industries such as medicine, electronics, solar energy, the aerospace industry, and transportation.

ZrCoin is a Russian company focused on tokenizing the production of synthetic zirconium dioxide. Zirconium dioxide (ZrO2) is a refractory substance widely used by raw material manufacturers for its heat-resistant abilities. Unfortunately, ZrO2 and other raw materials like it have limited lifespans. As a result, countries have seen an influx of toxic raw material waste sites.

Through proprietary technologies and thermal treatment, the team at ZrCoin has developed a new approach to the creation, recycling, and disposal of refractory waste. By treating and synthesizing refractory waste, ZrCoin can develop synthetic zirconium dioxide; A new compound with greater convector service life and higher heat tolerance. Furthermore, ZrCoin’s project is reducing the amount of waste created by raw material manufacturers.

AgriDigital is an Australian company applying blockchain technology to agriculture. It operates as a cloud-hosted multi-participatory supply chain platform.

AgriDigital mission is to address three main problems: payment security for farmers and sellers, give buyers access to flexible forms of supply-chain finance for commodity purchases and provide food transparency to consumers across the world.

OilCoin is working to tokenize oil assets. Each token operates like an oil future, replicating the movement of oil prices. However, unlike oil futures which are purely a financial instrument, the tokens themselves are backed by the cost of a single barrel of oil. Through the tokenization of a commodity, OilCoin is mitigating some of the volatility that is usually experienced by cryptocurrencies.

Why Choose a Bubbler?