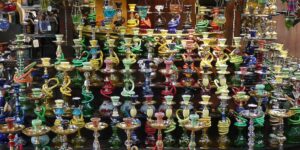 Hookah is an instrument used for smoking. It comes in either single or multi-stemmed form. The smoke of Hookah is inhaled through the combustion of flavored tobacco and heated coal. The smoke then goes to a water pipe, where the smoke thickens before it’s led to the hose and the mouthpiece where you’re hitting at. The method of smoking hookah makes it enticing for most people. But how exactly did hookah become famous?

Hookahs of the Past

The most primitive type of Hookah actually came from India and was made out of coconut shell, a natural material. Slowly, it became prominent in Iran and the whole Arab world. Hookah also made a stop in Turkey. For more than 100 years, hookah’s popularity in the said countries has continued. Then, craftsmen started to engrave wonderful designs for Hookah. These designs are mostly made of white or colorful flasks or with fruity and flowery designs.

It was on the late 19th and the start of the 20th century that Hookah became so famous in other parts of the world, too. The majority of the elite ladies found it fashionable to have a photo taken with a Hookah. It was gaining popularity when the cigarette got introduced in the market.

Though, undoubtedly, cigarettes are more popular among the mass, one can’t deny the influence of hookahs as well. In fact, you can easily see them in some colleges and universities. Studies show that there are 22% to 40% hookah users among college students.

Hookah smokers believe that it is safer to use compared to cigarettes. Cigarettes come from burning tobacco whereas hookah creates a flavorful smoke that comes from moistened tobacco. Sadly, smoking hookahs are banned from many U.S cities due to the community’s low level of social acceptance. Hookah businesses that remain open to the public have gained special permits from the local offices.

It is not only young students who developed an interest for hookah. Nowadays, adults also hang out in hookah bars. A survey shows that they find the flavorful hookahs appetizing. For those who are more passionate in smoking, there are portable hookahs which come in the form of a pen and can be conveniently carried around.

The greatest appeal of the hookah is not it’s ornately decorated design. It’s the fruity flavor you get from the mixture of tobacco, molasses, honey, fruit pulp, and other flavorings like coconut or mint.

The 10 Biggest iPhone Hacks Ever

How can Video Games Help You to Improve Your Thinking Process?