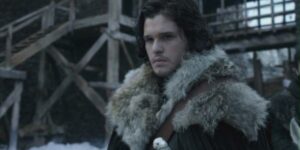 It’s remarkable to think that Game of Thrones is playing theatrically. Why go see something you can watch on TV for free? They tried this back in the day by slapping together episodes of The Green Hornet and Battlestar Galactica into movies, and it didn’t work.

Then again, some shows look amazing on a big screen, and Game of Thrones must look amazing in Imax. A lot of other fans think so too, because it made about $2 million on 205 Imax screens, or a per-screen average of $9,800.

As Uproxx and Variety report, an HBO executive said in a statement, “The cinematic brilliance and grand scope of the series is perfect for the Imax format. We are always looking to provide fans with new and exciting ways to experience the show and viewing two key episodes, along with the new trailer, on such an impressive platform makes for a great event.”

The trailer this executive is referring to is for season five of course, but before we get into that, we have to mention exactly how well Thrones is really doing in Imax. American Sniper, the current box office juggernaut, had a per screen average of $7,695, and as we just mentioned, Thrones has a per-screen average of $9,800.

Can Lenovo Do With x86 Servers What IBM Could Not?