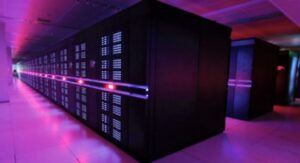 IBM and NVIDIA just announced they were building the world’s fastest supercomputers.  There is an ongoing arms war for which country can field the most powerful supercomputers.  There is, well, everything on the line here because these things are used for things like modeling catastrophic weather events and driving national defense.  IBM, NVIDIA, and the US all have something not only critical to each other’s fortunes but critical to the nation to prove here and today they announced how all three would be addressing this opportunity.

Let’s talk about the importance of this.

It is fascinating how quickly things are changing I was listening to a talk by the authors of the Second Machine Age the other day and they spoke about the billion dollar supercomputer Google had back in 2010 that could do what no other computer had yet done, teach itself to what images in pictures were.   In 2013 an engineer with off the shelf components and $20K did the same thing.

Each Supercomputer step forecasts the kind of power we’ll have in high end workstations in just a few years and on our desks in under a decade.   These are amazing jumps in very short periods of time and the players typically define the cutting edge of technology.  Winning the deal was critical to IBM and NVIDIA, and the success of the result is critical to the US.

Specifically the fastest supercomputer in the US today, Titan, produces 27 peak pataflops and the fastest in the world is Tianhe-2 in China currently operating at more than twice that speed.   The slower of the two new supercomputers announced will be nearly 2x Tianhe-2s speed and the fastest up to 6x faster at peak.

IBM has stepped away from x86 and is pushing their Power architecture as a strong alternative and, in tests, IBM Power servers continue to lead in both performance and reliability.   But they don’t have the marketing reach or presence of all of the x86 competitors in market and this win gives them a showcase which argues their position for them as the higher performing architecture.  A message critical to their success.   This clearly will boost the message that IBM’s POWER9 architecture is one to be reckoned with.

One statistic likely tells it all, were these new computers run off of CPUs alone the power needed would be equal to half of what is currently required to run Las Vegas.  NVIDIA’s GPU architecture once added to IBM’s creates a near performance miracle by making the result very thrifty and a lot less likely to become a material problem for powering the results.

This is also a showcase for two other new NVIDIA technologies NVLINK, an ultra-high speed interconnect capable of up to 200 Gigabytes per second, and 3D Stacked Memory that increases bandwidth by 4x, capacity by 3x, and is 4x as energy efficient as the likely alternative.   These systems are also using Volta, NVIDIA’s yet to be released next generation GPU architecture which gives you a sense for what they have coming to the rest of us next year.

The kinds of problem one of these supercomputers will solve (the other will be working mostly on confidential military problems) are a Comprehensive Earth System Model for far more accurate global weather monitoring and alerting, combustion analysis to create the most efficient low-emission engines (Tesla won’t be happy), full cell simulation which would be used to create better defenses against diseases like Cancer, and better predictive analysis of thermonuclear and core-collapse supernovae because, well, some scientists apparently don’t have a lot to do at the moment.  I’ll grant you modeling explosive star death could be fun with the right mind altering substances on a very high definition display.

The kind of work done on these supercomputers will change our lives and it is critical that the US remain in the lead because losing the technology lead in this area would likely predict the eventual fall of the US as a global power.   This is a massive proof point for NVIDIA and IBM who both need to be able to showcase their advantages and drive their technologies ever more deeply in the market.  This the rather impressive increase in performance of these machines, and the current rate of change,  it kind of makes you wonder just how much more capable Supercomputers will be two decades from now doesn’t it?

Should We Get Our Hoverboard Hopes Up?

Comcast claims they are in favor of net neutrality