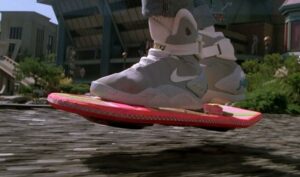 Okay, okay, we all want a hoverboard, we all know this, and Tony Hawk was part of the Funny or Die prank that got everybody’s hopes up. We’re still a ways away from an actual real hoverboard happening some day, or are we?

So now Uproxx ran a story of Tony Hawk riding the hoverboard again, but this time “it’s not a mean prank.” So what’s the deal?

Well as has been previously reported here on TG, a company named Hendo is developing a hoverboard that was able to get above the ground a little bit, and TMZ just filmed Tony Hawk giving it a whirl. Now remember, this hoverboard won’t be doing the tricks we saw in Back to the Future 2 just yet, but judging by the TMZ footage, it looks like it did a little more than we figured it could do, unless this is also a goof.

So many people want a hoverboard bad, and we have the feeling some tech geek out there just will not rest until it becomes a reality. Will that day come in time for 2015, the year of Back to the Future 2? Stay tuned…

NVIDIA and IBM Aim to Power the US into Supercomputer Leadership