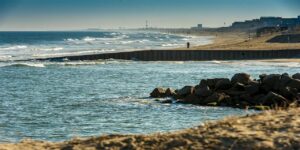 The shape of the Internet is continuously evolving and expanding, just like our vast universe. Large amounts of data are being transported across networks and stored at data centers around the globe. New companies arise, others fall. And, the rise of massive, hyper-scale cloud infrastructures only seems to speed up the expansion of the Internet with companies like Google, Amazon, and Microsoft in the driving seat exploiting the economies of scale to build platforms in a more cost-effective way.

The Atlantic subsea cable region has seen a steady capacity growth of 29% CAGR from 2014 to 2018 (STF Analytics, Industry Report 2019) and according to Cisco’s Global Cloud Index, a 50% increase in global hyper-scale data centers is expected by 2021. In 2016 two new transatlantic cable systems were built, AEC-1 with a diverse European landing point in Ireland and Project Express for lower latency between the financial centers in New York City and London. Along with ten other subsea cables they are part of the highly competitive North Atlantic subsea cable route. The Atlantic region is expected to continue to grow through 2022 and will be primarily fueled by the new routes in the South Atlantic and mid-Atlantic.

Historically, carriers and subsea cable owners have utilized the existing infrastructure in New York to connect to various carrier hotels and data centers, but despite the fact that almost all international carriers have a Point of Presence (POP) in New York State it is not the bullseye of America’s Internet. In fact, data often traverses New York to Loudoun County, Virginia where cities such as Ashburn, Sterling, and Reston are the homes of large data centers owned by companies such as Equinix, Coresite, and QTS.

The rapid expansion of the cloud has increased the importance of a robust and resilient infrastructure and has led to changes in Virginia’s data center landscape in which Virginia Beach has been playing an important role in the last 2 years.

With over sixty data centers Loudoun County is rightfully called “Data Center ally”. It has grown into an ecosystem consisting of service providers, carriers, data centers, and many other Internet-related businesses. This rapid growth should be a cause for concern with regard to congestion and our dependence on the region. We should not forget that the infrastructure we depend on for our applications and systems is vulnerable to disruption, especially for users utilizing cloud services such as the US government. That’s why large cloud providers and content providers have already invested heavily in new data centers more south of Virginia State in order to fulfill and support the growth of the cloud in the next decade.

Our services rely on having multiple data center locations spread apart to provide backup for each other. Geographic diversity is key in providing continuous availability of the cloud and applications and should be part of any infrastructure design. The development of new data centers at alternate locations in the state is no surprise. Cities along the I-95 such as Richmond are able to provide for sufficient geographic distance with Loudoun County as well as space, power, and connectivity. Since 2010 Microsoft has invested $ 2 billion in its Boydton, Virginia data center campus while Facebook opened its $ 2 billion data center campus in Henrico county. Richmond is also the home of carrier-neutral data centers such as QTS and EdgeConneX.

Traffic between the USA and Europe is primarily routed through New York leading to a single point of failure concerns in the Atlantic region. Especially after Hurricane Sandy in 2012 during which data centers around the city battled flooded basements or experienced power outages due to generator failures or preemptive power grid shutdowns such as in Lower Manhattan.

The landfall of the BRUSA and MAREA cable systems in 2018 and the DUNANT cable system (RFS in 2020) in Virginia Beach proves the need for leading Internet companies to have more diverse connectivity options.

In the first place, Virginia Beach has enough distance from the New York and New Jersey cable landing sites to avoid cluttering with existing cables. Subsea cables such as MAREA and DUNANT benefit from the diverse path to the European mainland which increases the resiliency of the East Coast’s infrastructure, lowers the latency with European Internet hubs such as Paris and Marseille and decreases our dependency of New York and New Jersey.

Secondly, being located south of Loudoun County Virginia Beach’s position provides the still popular data center region with a redundant path for connectivity. Virginia Beach is connected by multiple terrestrial networks, such as mid-Atlantic Broadband, Segra, and Windstream, all of which provide for connectivity to Loudoun County as well as surrounding cities along their routes.

Lastly, cables such as BRUSA fulfill the need to avoid Florida by utilizing Virginia Beach as a diverse hub to South America and Central America bypassing the NAP of Americas and provide direct connectivity to Loudoun County at lower latencies.

The changes seen in the last two years show the significance of Virginia Beach and can lead to some interesting new fiber optic cable opportunities in the Atlantic, for instance:

Multiple carrier-neutral data centers already exist in Virginia Beach and the development of new facilities will most likely grow as the ecosystem expands.

Building a cable system is not a walk in the park. However, the availability of one or even two open Cable Landing Stations (CLS) can help drive the development of new subsea cable systems as long as it fits the requirements:

The space requirements for subsea cables depend on the technology used, the initial amount of capacity deployed and expected growth in the following years. Cable owners will always deploy additional capacity in steps. This means that more equipment is placed aside existing ones over time. The same goes for any space requirements from connectivity providers.

A BMH is a point where the submarine cable from the sea is split into two parts (fiber-optic and power conductor) which are then joined on to the matching separate land cables for the run back to the CLS. The city of Virginia Beach has already established two landing sites with BMHs, Camp Pendleton and Sandbridge, as well as two diverse terrestrial routes to the Corporate Landing business park. There might be an opportunity to designate additional BMHs in the future, e.g. Boulevard, Fort Story and Bay Island. This would provide for a more resilient and robust infrastructure along the city’s coastline and make it more competitive to the already congested landing sites in New York and New Jersey.

A diverse ecosystem of cable systems and terrestrial backhaul networks is more likely to be a success when an open CLS is connected by as many network operators as possible. Virginia Beach is already well served by multiple fiber optic networks and most likely other US-based operators will connect to the city and the CLS overtime.

Subsea cable systems have an uptime between 99.985%-99.999%. The CLS should be able to support these systems with Service Level Agreements (SLAs) and infrastructure design in line with the same uptime specifications.

Unfortunately, it is difficult to predict the precise amount of power required. A typical transatlantic cable system’s power requirements can go up as high as 20 kilowatts. The power draw of the SLTE and other optical equipment also highly depends on the technology used. However, at initial capacity, the power draw is significantly lower and increases only with each subsequent capacity upgrade by the owner.

Considering the environmental changes observed in recent years it is becoming increasingly important for new facilities to be built above sea level in order to avoid far-reaching consequences during a flood.

Considering the potential of the city’s location there might also be a need for a second location in the future in order to provide for more redundancy. Cables along the same route could utilize two separate facilities to avoid a single point of failure. Still, both facilities should be interconnected to allow for cross-connects between systems as well as backup or capacity swaps among cable owners.

Corporate Landing Business Park in Virginia Beach has already become a key location and the home of multiple data centers.

Telxius owns a 3.5-acre plot and currently has a 25,000 sq feet Cable Landing Station which houses the MAREA and BRUSA cable systems. Telxius has not announced any plans to expand its data center space. The Telxius CLS Campus connects directly to main data center regions in the USA, including Ashburn, Richmond, and Phoenix.

PointOne’s NAP of Virginia Beach campus is a multi-purpose, carrier-neutral cable landing station and edge computing data center. The campus will consist of two facilities constructed at 15 feet above sea level and built to withstand 200mph winds. We have reached out to Kelly Newman, General Manager of NAP of Virginia Beach, she mentioned when completed the campus is able to provide for 40,000 square feet of white space, and up to 9.6 megawatts of critical load and house the dry plant of up to eight subsea cables. The campus will be connected to the Telxius Cable Landing Station across the street via two diverse paths to allow clients to directly connect to the MAREA and BRUSA cable systems. Construction of the first building with 20,000 square feet of white space and 4.8MW of critical load power is expected to be completed by July 2020.

The Globalinx Data Center Campus is a carrier-neutral data center just over 18 feet above ground level. According to Globalinx CEO Greg Twitt, the first phase of the project has been completed and is operational. The second phase of the project is the build of a 6 megawatts open Cable Landing Station able to house over four cable systems and is expected to be completed and operational by the second half of 2020. The Globalinx campus is located ~1 mile off the Telxius CLS and will be connected to this facility via 2 diverse fiber paths by year’s end.

Outside Virginia Beach, there are multiple carrier-neutral data centers as well. EdgeConnex is operating two facilities, one in Norfolk (4,600 sq feet) and one in Richmond (6,700 sq feet). Also in Richmond is the QTS Richmond data center, a 1.5 million sq. feet facility. Telxius has a presence in this facility to allow for direct interconnection with its MAREA and BRUSA cable systems. Last but not least, CenturyLink operates two data centers in Richmond near the I-95.

In a short period of time, Virginia Beach has grown into a diverse new landing site for new subsea cable systems on the East Coast. PointOne’s NAP of Virginia Beach and Globalinx’ Phase 2 Cable Landing Station will most likely strengthen the city’s relevance in the market for future subsea cable systems and stimulate the development of new data centers along the I-95 “Digital Highway” and Richmond.

The Under-Appreciated Heroes At Intel