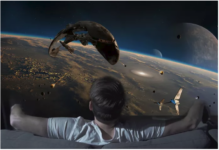 It figures, one month after I buy a new 75” Samsung TV with 4K and HDR, AMD and Samsung announced a new TV in this size class with AMD FreeSync. Particularly sad is that the replacement TV I bought is for the game room and it hooks up to an Xbox One which promptly reported it wouldn’t run HDR on it because the frame rates were too low. Oh well I did get that TV on sale.

But this has been a constant problem, you want a TV for gaming even for console gaming and while it seems to have the primary acronyms (4K, HDR, UltraHD etc.) it still doesn’t comply with the game console or PC specification. These new TVs from Samsung attempt to fix that because the FreeSync brand signifies it will work with the primary Sony and Microsoft gaming consoles and with your AMD graphics powered PC. Sadly AMD, Intel, and NVIDIA aren’t on the same page here. NVIDIA has their own G-Sync solution and Intel graphics are still a bad joke.

Those of us that use consoles on our TVs know that bigger is better, but TVs have kind of sucked when it comes to performance. First there was SD which really wasn’t good for gaming at all after we evolved from the side scrollers and moved to high end graphics, HD wasn’t much better as it just didn’t provide the level of resolution needed in most games, and then we had 4K but initially the consoles didn’t support it, and then, when they did you had issues with frame rates and color performance which lagged monitors significantly. We even tried to PC game on them but, particularly with a good strong graphics card, the TVs just couldn’t keep up. Still a lot of us used them anyway because putting the game up on a huge screen seemed it increase the reality and engagement.

Now you could go to oversized monitors, but they could get wicked expensive with some 4K monitors priced in well over $4K they were out of reach for most of us gamers. But these new Samsung TVs start out just under $1,000 at 55” and go up to around $6K for the largest and highest performing in the series. 55” is likely more than enough for us for most types of gaming but I’d be lying if I didn’t say I had lust in my heart for the big, expensive, 82” sets.

Gaming on these new Ultra HD HDR sets is glorious and they do truly put you into the action but, next up, I expect will be head mounted displays.

I’ve been messing around with a Cinego, which is a head mounted display I got through Indiegogo, designed more for movies than games though it supports both. This is one of the first 4K M-OLED micro-display headsets and I’m impressed how good it is. It has its own 4.5-hour battery and you can either load movies onto the device or plug it into something else using it’s HDMI socket.

Now these don’t support either G-Sync or FreeSync yet and while it works OK with a console and game controller I have issues with a mouse and keyboard if I can’t see them. This suggests we’ll also be waiting for the mixed reality form of this headset before it will truly be able to move into PC gaming anyway.

However, with this level of resolution the picture is amazing and at $500 this is a vastly cheaper solution than the 82” TV the glasses seem to emulate. Oh, and you don’t tie up the TV which can provide for a better relationship with siblings, parents, and spouses. So, I expect, the next big step will be to integrate this new wave of very high-resolution headsets with this syncing technology to make gaming even more immersive.

Wrapping Up: Bigger Is Better

In the end this move to get TVs to become far better gaming monitors is a good one. It has been a long time coming. But I don’t think it is the end game either as head mounted displays are coming and these new 4K M-OLED micro displays are pretty amazing. Now they have to embrace something like FreeSync to truly give us an affordable alternative to the small monitors most of us still use. I just wish I’d known about these new Samsung TVs before I had to buy a new one.

How to Hide and Manage Location Services on iPhone

3 Most Interesting Ways to get Bitcoin