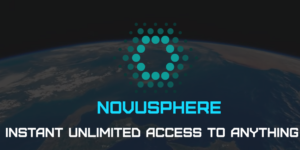 There’s plenty of buzzwords flying around the blockchain space these days, but almost none of them capture the essence of blockchain’s revolutionary potential like *Web 3.0* does.

While the Web 3.0 may sound like some distant concept in a galaxy far, far away, the building blocks for that webwork are already here amongst us. The hallmark features of the emerging internet are interactivity, continuity, and saturation.

However, without proper safeguards in place, people risk letting centralized forces generate the new web. That’s where Novusphere makes its intervention — using Novusphere’stools, users can lay the groundwork for an unstoppable free internet wherein the people decide what has value online and what doesn’t.

To understand a bit more about how Novusphere is helping shape the next generation of the internet, let’s take a look at the outgoing internet paradigm and how it’s shifting.

A Brief History of the Web

How well do you remember the early internet? The days of Tripod websites, AOL, Ask Jeeves, and other relics may be long gone, but as part of the Web 1.0, they were instrumental in the growth of the largest information network in human history.

The Web 1.0 was basically a massive repository of information that users couldn’t really interact with. Instead, it was a mausoleum of web pages — surfing the early web was a lot like going to the world’s most boring gallery. People put up pages dedicated to all kinds of strange things, but efficient search functions were lacking, making the early web a big disjointed mess.

Sure enough, the internet began to evolve until it reached what was definitively called the Web 2.0 by O’Reilly Media back in 2003. The second coming of the web was marked by a *social* uprising made possible by blogs, YouTube, Facebook (but let’s not forget Myspace), Instagram, and other applications that focused on sharing user-generated content.

This movement — from a stale internet to one in which people began sharing with each other, marked a moment of innocence before apps and websites started figuring out how to make themselves profitable — by cashing in on your content and data.

Over time, Web 2.0 apps have figured out that what they really have on their hands is a captive audience. Roughly 30% of Earth’s population actively uses Facebook. The content promoted, generated, and popularized on the platform doesn’t happen accidentally — the platform’s profit-generating algorithms bend Facebook space-time to encourage and promote certain content to audiences.

The critical evolutive step from Web 2.0 to 3.0 is internet saturation wherein every device interacts at some level with the web. This level of web interaction is, of course, unprecedented, and poses serious questions about the platforms we allow to generate content for us.

Novusphere is tackling these questions head-on by creating the tools for a free generation of content that arrives in time for the most widespread version of the web yet. In essence, Novusphee is a symbiotic network of shared information that is creating a horizontal power paradigm necessary for the realization of the Web 3.0.

Instead of being force-fed content by the all-powerful algorithms behind the Facebooks, Instagrams, and Reddits of the world, Novusphere-powered content applications allow users to harness the blockchain to directly participate in every level of the content cycle — from creation, consumption, compensation, promotion, and everywhere in between.