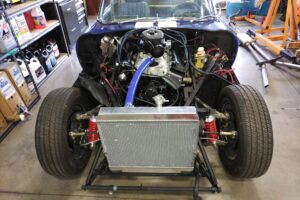 I’m a huge fan of the reality show Street Outlaws which is about a group of guys out in the middle of nowhere who pretty much kick everyone else’s butts from coast to coast street racing. But it points to a real problem those of us that like track days, bracket racing, or race without sponsors have. Affording good parts is a huge problem and the folks that win have both talent and a ton of money, and sometimes, the money is a huge equalizer against talent. To be competitive folks pretty much spend their retirement, kid’s college funds, and mortgage payments on car parts which are wicked expensive largely because many of them are both unique and made of materials that are really hard to manufacture cheaply.

One of the interesting things about HP’s new industrial Jet Fusion 3D printers is that not only are the parts strong enough to use for racing they are about 1/10th the cost and weight of their aluminum counterparts. This puts them near carbon fiber in performance but at a tiny fraction of the cost. In addition, the time it takes to print them is also a fraction of that typically needed to mill an aluminum part or form a carbon fiber part.

This could be a game changer not only for the automotive industry in general, which has taken to these printers like ducks to water particularly for short run supercars and prototypes but for those of us that don’t have Bill Gates budget and want to be competitive on the track.

Right now, there are 4 limitations to using these 3D printers more broadly. The first is you have to develop a new skill set. To truly optimize a 3D printed part, you need to learn how to design it into you project and the way you reduce weight and assure both durability and strength is very different than if you were using a more traditional metal or carbon fiber process. When these parts are done right some of them look truly alien, which, while incredibly cool, speaks to just how different the materials are in terms of how they gain durability and strength.

Second these parts are formed at relatively low temperatures for automotive use. This means that they can be used for a lot of things including air intakes, water cooling, and trim pieces but won’t hold up for anything that is high temperature like exhaust manifolds, engine blocks (or any internal engine components).

Third the printers are limited by their printing surface which, right now, means they can’t be used for parts like wheels, driveshafts, or most body panels.

And fourth they aren’t a cheap date with the machines producing production ready parts costing hundreds of thousands of dollars. Still they are cheaper than metal sintering machines and there are a growing number of firms that do automotive parts that are buying them so, while they aren’t yet cheap enough for most automotive shops, you can send your design to one of the specialists that currently has the machine and they can produce it for you relatively quickly depending on backlog (and apparently these machines are in high demand because the shops that spoke to us indicated they were planning to buy a bunch more of them).

As HP advances this technology they plan to both build larger machines and use more robust materials like metal. This would raise the thermal limits of the parts and allow them to make larger parts putting the possibility of 3D printing an entire car (minus the electronics, though that too is coming). In addition, as these printers advance, like most technology they’ll not only get less expensive, but they’ll become easier to use with more parts of the process becoming automated.

Even so, one of the customers who spoke to us, paid for their printer with its first job the parts were so much cheaper than the alternatives. While that experience was relatively unique the payback on even these expensive printers is surprisingly short given the demand for fast custom parts in a number of markets and professional racing is one of markets that seems to really like this technology.

I’m building a custom car myself (that’s a progress picture of it at the top) which, sadly, will have a ton of go (a 450 HP high performance 327 Chevy engine) but will be more show as I’m a tad old to be racing seriously. And, when it comes to street racing, I’d much rather live vicariously through others than risk that my new baby get impounded. Still, even I’m looking at using this technology for custom parts like valve covers, interior components, and a wicked intake that would cost a fortune to have milled.

So, while these printers will undoubtedly revolutionize a number of markets including the automotive market, what I’m really excited about is how they’ll revolutionize my automotive hobby. Making that hobby more affordable will not only help assure my retirement but will reduce the number of times my wife looks at me like a dumb ass for spending way too much on some part she thinks is stupid, but I can’t live without. For us mentally challenged car nuts, these printers are, and will become, life and marriage tools (not to mention we’ll win more races).

App Deployment: What Tools Are the Best For My Team?

5 Tips to Make Moving with Kids Much Easier