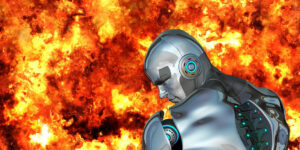 Hollywood has done its fair share of spreading awareness, awe and terror by means of the Terminator series and the like. All of us are too familiar with the apocalyptic scenario of robots becoming intelligent and deciding to eradicate us from the face of this earth due to the fact that we are simply pestilential as a species.

But no matter, let’s just look at this phenomenon called A.I on a day-to-day basis instead of getting too embroiled in future doomsday scenarios. From high-tech security cameras to Siri to even self-driven cars for that matter, A.I does seem to be advancing slowly, yet steadily. This turns out to be a challenge for computer repairs specialists, as now they have to upgrade their knowledge in order to keep up with the trend. But when technology advances on an unprecedented level, it would be a very different story.

This itself proves that technology is quite the double-edged sword. Take it too far and sometimes the potential implications are staggering. The Future Of Life Institute has a tagline that sums it up quite well “Technology is giving life the potential to flourish like never before …or to self-destruct”. Even Stephen Hawking has stated that A.I. “could spell the end of the human race”.

Having said that, let us look at some of the reasons why A.I could pose a grave threat to humanity as a whole.

At the end of the day, there are a lot of myths surrounding the topic of A.I. leading to a lot of people worrying about the eventual day of reckoning plus the main myth that it’s only a few decades away from literally taking over every aspect of our lives. Sure, it could happen, but it’s still fairly hypothetical at this point of time which is absolutely no reason for us to assume the worst outcome. The fact that whether machines will actually become conscious in the same way human are is still a matter of fiery debate, so the future may not be so bleak after all.

The Beginner Entrepreneur’s Guide to Facebook Advertising Made Easy