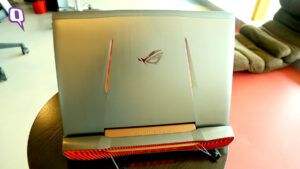 Asus is quickly building up its gaming laptop range with its ROG series. The company is bullish about the potential of gaming laptops, and with more than a couple of products in their line up right now, they seem to have a plans for that sector.

The ROG series starts at around $700 and with its recently launched ROG G752, goes up to $1.500. At this price most gamers may opt for Alienware, or a high-end MacBook Pro but it would be unfair to count Asus out before giving the ROG G752 a shot.

The Asus ROG G752 has everything that a gamer would expect from a high-end machine. Latest top-end processor, high RAM count (16GB here) and plenty of storage with a mix of SSD and HDD.

And the latest in line graphics card with 4 gigs of power. For those who desire even more, the ROG G752 has a 17-inch Full-HD resolution display. This raw power is capable of reducing a passionate user to tears.

The in-built keyboard has a solid feel to it, with keys responding to most gaming manoeuvres. The backlit feature is a must have for a gaming laptop, and we’re glad Asus has offered it for this price.

The laptop may be huge, but that didn’t result in any apparent heating which can pose an issue for the user. The heat dissipates through shafts that are placed right behind the display.

The quality of the 4GB graphics card can’t be doubted, especially when we managed to touch up to 67 frame rates/sec (fps).

Connectivity will be a problem on the Asus ROG G752.

On standard gaming benchmark, the ROG G752 came above most high-end laptops, which clearly puts it in the Alienware league. You can run modern-day gaming titles, and the not-so-old ones. Performance satisfaction assured.

For a machine that costs as much as this, the ROG G752 feels like it belongs in an IT lab, rather than your gaming space. The 17-inch real estate comes with its own set of weighty issues, and at almost 9 lbs (4kg), this is a huge machine.

Who likes a gigantic display on their laptop?

You’d have to go on a hunt to find a 17-inch sized bag, which is big enough to carry this monster. Although, we’re happy with Asus going for a full-HD 1920×1080 pixels display here, we would prefer a 2K or 4K display variant at this price point.

Most gaming laptops fail to offer a long battery life, and the G752 is no different. It’s hard to expect anything beyond 6 hours with this machine, looks like the heavy-duty power under hood, does end up working against the big-size battery in there. Also, the size of the power adaptor doesn’t make things any easier.

The Asus ROG G752 has all the ingredients that are critical for a gamer on his machine. High-end hardware, powerful graphics card, and tons of storage. This, however, plays havoc with the stature of this laptop, and add the 17-inch dimension, the G752 is a monster in the truest sense.

But is it worth its price? It depends on how much you’re willing to experiment, and on your willingness not to prescribe to the common notion of opting for Alienware or MacBook at a higher price, at least for gaming.

Microsoft To Lay Off Most of Former Nokia Employees

Last Day to Get Your PC the Free Microsoft Windows 10 Update!