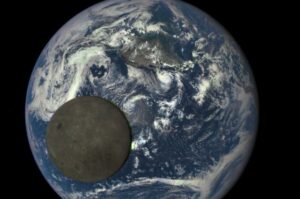 For the second time in a year, a NASA camera aboard the Deep Space Climate Observatory (DSCOVR) satellite captured a ‘lunar photobomb’ – a stunning view of the Moon as it moved in front of the sunlit side of Earth, crossing over the Indian and Pacific oceans.

The project recorded this event on July 5 with the same cadence and spatial resolution as the first ‘lunar photobomb’ of last year.

The images were captured by NASA’s Earth Polychromatic Imaging Camera (EPIC), a four-megapixel CCD camera and telescope on the DSCOVR satellite orbiting one million miles from Earth.

From its position between the Sun and Earth, DSCOVR conducts its primary mission of real-time solar wind monitoring for the National Oceanic and Atmospheric Administration (NOAA).

This gif shows the far side of the moon, illuminated by the sun, as it crosses between the DSCOVR spacecraft’s camera and telescope, and the Earth. (Photo Courtesy:NASA)

EPIC maintains a constant view of the fully illuminated Earth as it rotates, providing scientific observations of ozone, vegetation, cloud height, and aerosols in the atmosphere. The EPIC camera is providing a series of Earth images, allowing study of daily variations over the entire globe.

The new images show the moon moving over the Indian and Pacific oceans. The North Pole is at the top of the images.

DSCOVR is orbiting the Sun-Earth first Lagrange point (where the gravitational pull of Earth is equal and opposite to that of the Sun) in a complex, non-recurring orbit that changes from an ellipse to a circle and back, taking the spacecraft between four and 12 degrees from the Sun-Earth line. This orbit intersects the lunar orbit about four times a year. However, depending on the relative orbital phases of the moon and DSCOVR, the moon appears between the spacecraft and Earth once or twice a year.

The last time EPIC captured this event was on July 16, last year.

EPIC’s “natural colour” images of Earth are generated by combining three separate monochrome exposures taken by the camera in quick succession. EPIC takes a series of 10 images using different narrowband spectral filters – from ultraviolet to near infrared – to produce a variety of science products. The red, green and blue channel images are used in these colour images.

Since the moon has moved in relation to Earth between the time the first (red) and last (green) exposures were made, a thin green offset appears on the right side of the moon when the three exposures are combined. This natural lunar movement also produces a slight red and blue offset on the left side of the moon in these unaltered images.

Understanding the Power of Visual Advertising

Blast from the past: Games that are still here and evolving