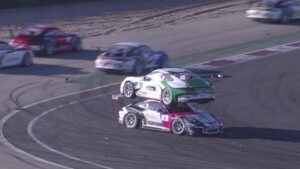 This incredible footage shows two racing cars involved in a high-speed crash – with one ending up ON TOP of the other.

The cars were zooming round the race track when two Porsches collide head-on, before one ends up rolling onto the other’s roof.

Amazing footage captured on a dashcam shows the moment the motor mounts the bonnet and drives up onto the roof, leaving windows smashed and wheels spinning.

The drivers looked really surprised when they emerged from the cars. There were around 20 cars on the grid – luckily no one was hurt. It was incredible seeing it happen – when a stunt man wants to do that he can never pull it off!

How is technology changing the way we house hunt?